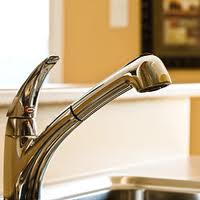 I’m that girl that will try to fix or put together almost anything. If it’s a bookshelf, a table, and even a toilet… I’ve tried my hand at it and succeeded. That’s one of those things I get from my dad. Aside from our smile, not being morning people, and slow eating… I inherited the trait of being pretty crafty with my hands. (Note to future hubby: Being a Mr. Fix It is not a pre-requisite, however, if you knew just a little bit about cars that would be a major bonus!) Anywho, back to the matter at hand.  I’ve been dreading having to come out of pocket to replace the faucet in my kitchen. Out of nowhere, it started spewing water that would eventually run onto my counter and spill over to my floor. Without any real knowledge of the issue, in my mind the damage was beyond Ms. Fix It’s ability and would need replacement. Of course I had too many other things going on at the time. The last thing I wanted to deal with was Home Depot! So I put it off for a few weeks which meant cleaning up water every time I used the sink. So annoying!

One day I decided to take a little time to thoroughly inspect it. It wasn’t until I unscrewed it from the base that I noticed the little ring that connects it to the hose was loose. Once I tightened it, the problem that I imagined was so big was suddenly fixed and with very little effort on my part. I simply had to detach it to find the source of the leak and to my surprise it was just a simple twist of a knob and BAM… just like new.

Almost instantly an image came to mind. I began to think of all the things in my life that seem so insurmountable. The things that look like they’ll take years to accomplish. The things that look like they will require tremendous sacrifice and risk. The things that I think will need to be completely scrapped and require me to start from scratch. Even people that I may have thought were expendable on this journey. God was speaking to me loud and clear. There are things that I have been stressing over that are probably ten times bigger in my imagination that they are in reality. I tend to move at light speed trying to get all that I have to get accomplished so some things get overlooked or pushed aside if I feel like I just can’t deal with it at the moment. Those things are usually the issues that are holding me back from my assignment.

You know how life tends to get in the way of the things you’d rather be doing? Well, the solution could be something really simple that would require a simple phone call or a few hours of research. You may just need to take some time to investigate a little longer. Quit all the knee jerk reactions.  Quit setting it aside for things to slow down… they never do! Take a little time on some things and I’m sure those big tasks will turn into small ones if you just dug a little deeper.

I’m sharing this not because I want to boast on being a Ms. Fix It but because I’m fully aware that there are areas in my life that need fixing that I can’t do on my own. And I know that many of you have that same story. There are dreams that God has placed inside of you. There are inventions, stories, books, designs… that  you want to see come to pass. Stop thinking it will take years! Stop thinking that you have to get this in order and straighten that out. Some of these things just require you to buckle down and focus on them a little longer. Write out the plan. Talk to a few folks. Create a mission statement. Design the logo. Just start on something! It will require work, of course. You will have to dig deeper than you think you have time for but most times that’s all it takes to get to the source.

In my case, the source was a loose knob. In your case, it could be signing up for a class or spending a weekend in the library, or making a phone call, or joining a new network of people in your industry. Whatever it is, take time to ask God and listen to his instruction. It will cost you a lot less in the long run if you take the time now to get to the source.

One thought on “The Leaky Faucet”

Join 425 other followers
Follow Tuesdays with Bianca on WordPress.com