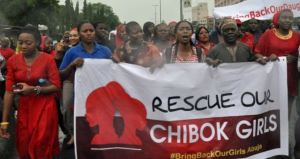 On April 14, 2014, an Islamic extremist group, Boko Haram, invaded a school dormitory in Nigeria and lured over 200 girls away by posing as military soldiers coming to rescue them. The girls were in hiding during a wrath of gun fire so they believed that the men were there to save them. It didn’t take long before they knew who they really were and it was not for their well being.

Hopefully many of you have been following the story and understand the severity of the matter. These men are against Western education, Christianity, and any Muslims that they believe are traders. After their leader Yusuf was assassinated, it was guaranteed that they would seek revenge. Though many innocent people have died at the hands of these extremist, young girls are the most recent targets. There are reports that the girls are being sold as child brides and sex slaves for as little as $12. The sad truth about the matter is that many people don’t feel at all connected to this tragedy. It’s thousands of miles away on a continent that many may never visit. The girls are without names that anyone beyond their families and friends would know. So many people will write this off as a sad state for Nigerians even after they post #BringBackOurGirls to their social media sites… I mean, it’s all about appearances right?

A few days ago I posted a status asking why so many pastors and spiritual leaders can post about faith, overcoming fear, and defeating the enemy in the generic sense but when it comes to addressing real life tragedies directly, they’re silent! If any time people need to hear from them it’s now! So this blog is geared towards sharing the facts on the epidemic of sex trafficking and the importance of our faith during these tests. It’s happening everywhere from our backyard to across the seas. Just like the Chibok girls were tricked into submitting to their captors, other girls around the world are lured by false promises and ill intentioned adults. Though it affects young boys, adult women and young girls are the majority of the victims. Here’s a few facts to show why the slogan #BringBackOurGirls should stand for all female victims across the world.

Trafficking women and children for sexual exploitation is the fastest growing criminal enterprise in the world.1 This, despite the fact international law and the laws of 134 countries criminalize sex trafficking.

The leader said it plain and clear in the recent video, “There is a market for selling humans. Allah says I should sell. He commands me to sell. I will sell women. I sell women,” according to a CNN translation from the local Hausa language. What is being done to these Nigerian girls is being done to millions of other young women across the globe; therefore making it an issue for humanity. In the midst of it all we must keep our faith in tact. It’s so important that while we learn the facts, we don’t let them dilute The Truth:

“You blow the whistle on godless nations;
you throw dirty players out of the game,
wipe their names right off the roster.
Enemies disappear from the sidelines,
their reputation trashed,
their names erased from the halls of fame.

God holds the high center,
he sees and sets the world’s mess right.
He decides what is right for us earthlings,
gives people their just deserts.

God’s a safe-house for the battered,
a sanctuary during bad times.
The moment you arrive, you relax;
you’re never sorry you knocked.”

That last line says it all. God doesn’t come to us. He has never left us. We just don’t always acknowledge Him or His power. Once we enter into His presence there’s peace that surpasses all understanding and comfort in the midst of pure hell. So no matter what’s going on in the world, hold steadfast to your faith. Know the God you serve. Despite what it looks like, He will show Himself in the darkest hour. We just need to continue to do our part. However He is leading you to contribute to the solution, do it! Whether it’s through writing, missions, sermons, prayer vigils, fundraising, or community forums. Whatever you do, don’t lose faith.

“All we have left is to pray to God to help them and help us,” said Nigerian mother of missing 15 year old girl.